When you book with an account, you will be able to track your payment status, track the confirmation and you can also rate the tour after you finished the tour.
Sign Up
1266
3.5 h
Availability : All year around
Min Age : 18+
20 max

Though Italy is more famous for its wine production, the popularity of beer has soared in recent years, particularly in the capital where a number of new bottle shops and craft beer pubs have popped up. This convivial tour takes in some of our favourite bars and allows you to sample Italian ales from breweries in Lazio and throughout the bel paese. Not only will you get to enjoy a taste of the local beer scene, you’ll also discover Rome’s must-see sites along the way, including the Colosseum (from outside), Piazza Venezia, Trevi Fountain, Pantheon and Piazza Navona.

In a group of no more than 20 people, you’ll make beer stops during the tour, always moving at a comfortable pace. First though, we meet at the Colosseum, the largest amphitheatre ever built and Rome’s most famous monument. From outside, our friendly guide will reveal how this awe-inspiring structure was built almost 2,000 years ago and recount the gruesome gladiatorial battles that took place there. Did you know that it’s estimated over 400,000 people died in the Colosseum, as well as more than 1 million animals?

Next, we walk along Via dei Fori Imperiali which leads us past the Roman Forum, the Forum of Trajan and the Forum of Augustus. The straight road cuts through a large archaeological area of Rome’s historic centre – so there’s lots for us to admire – and was built by Fascist dictator Benito Mussolini between 1924 and 1932. Though the road was publicised as celebrating ancient Rome, many medieval and Renaissance structures were destroyed to make way for it.

As mentioned, the tour of the centro storico will be interspersed with stops for refreshments. Whether you prefer lager, ale, IPA or other, more unusual, craft beers, we’re happy to recommend quality Italian beers according to your tastes.

Rome’s beauty in the eye of the beer-holder

The next historical stop of our tour is Piazza Venezia, Rome’s most central hub and busiest intersection. The square is named after Palazzo Venezia, which was built by a Venetian cardinal in the 15th century but, these days, the most eye-catching monument in the area is the enormous Altare della Patria. Construction of this striking monument was completed in 1935 to an unsure Roman public who nicknamed it ‘The Typewriter’ for its hefty size and contrast to the style of other buildings nearby.

From Rome’s most controversial monument to its most romantic: the Trevi Fountain. Be sure to throw in a coin to ensure your return to the Eternal City. Tossing two coins means you’ll fall in love on your repeat visit and tossing in three means you’ll marry that special someone too. We then meander through Rome’s cobbled streets until we reach the Pantheon, which literally means temple to ‘all gods’ and refers to the building’s original purpose as a pagan place of worship. In the 2,000 years since its construction, the Pantheon has stayed in continuous use, eventually transforming into a Christian church into the 7th century. Its unreinforced concrete dome remains the largest ever built and is just as captivating to present day visitors.

Our expert guide and beer lover will then lead you to the final leg of the tour at Piazza Navona. We’ll spend some time examining the art and architecture of this alluring part of town – learning about how a rivalry between renowned architects Bernini and Borromini formed the square – and then head to our final pub of the day, where we can relax, beer in hand, and reflect on Rome’s rich historic and brewing heritage.

Your tour guide will meet you by “Casa dell’acqua Acea”, next to the “Colosseum” metro exit. From there you will follow your guide to the Piazza del Colosseo, walking down from Via dei Fori Imperiali to your first beer stop. Next in line is Piazza Venezia and Trevi Fountain. Another stop for beer and after that Pantheon and Piazza Navona.

Casa dell’acqua Acea, Next to the Colosseum metro exit 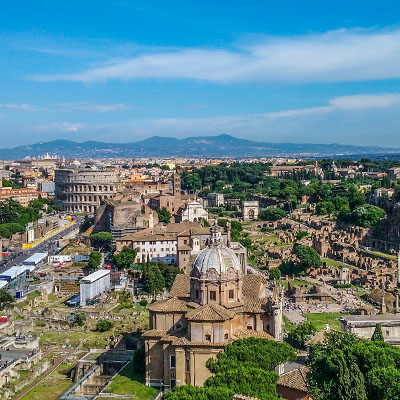